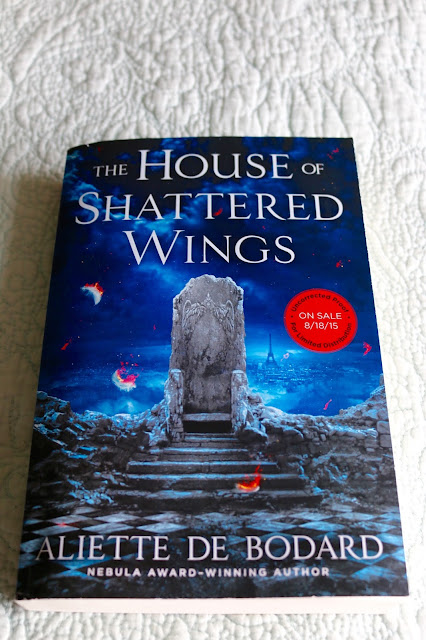 This book sounds awesome; set in Paris in a post-apocalyptic world that is ruled by The Fallen (fallen angels). There are several main Houses, kind of a gang for the elite, that always seem to be feuding or at war with each other.
So, yes, awesome story idea but I feel that it was poorly executed. It reads as though you’re at such a distance while you’re watching the story unfold. I didn’t feel a connection to any of the characters, or really even the house, Silver Spires, that the book follows. It felt very impersonal and that made it extremely difficult to get into the book. There were also a LOT of details at the beginning of the story, making it hard to follow or get in to. It probably took between 50 and 100 pages to be hooked into the story and sold on finishing the book.
It also read like it was written by a non-native English speaker (and turned out it was) which was very distracting from the already hard-to-get-into story. There were no blatant errors, just words or wording of sentences that technically work but that no native speaker would use.
There were no “ah-ha!” moments, no big character changes, no revelations. Just people saying, “I suck at what I’m doing,” and, yes, they do suck at what they’re trying to do and THEY DON’T TRY TO CHANGE OR DO BETTER.
For the length of the book and the epic premise, I expected a lot more from this book and unfortunately it fell flat on it’s face.
2/5 Stars

This book was sent to me as part of the Ace Roc Street Team for review. All opinions are my own.