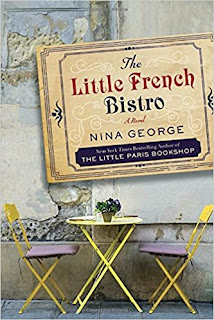 The Little French Bistro follows Marianne, a 60-year-old German woman who tries to commit suicide while on holiday in Paris with her husband. She has lived in an oppressive household with him the entire time they’ve been married -40 years- and she has never stood up to him. He refused to allow her to have a job, drive a car, or play the accordion. After surviving jumping off a bridge, she finds herself on the coast of Brittany after being lured there by a beautiful painted tile of the coastal town of Kerdruc. This is a story of discovering your true self and shedding the person you’ve only pretended to be so far.

This seems to be a very rough draft that lacked the magic that The Little Paris Bookshop had. Enough  good stuff peeked through that the book is bordering on magical realism, but it just doesn’t sparkle like I feel it should and know it can. I hope in the final draft the story that it is a bit more smoothed out and the switches in points-of-view are more seamless. It felt like when a scene or POV was changed it was very abrupt. Also, there was a particular sex scene that I though was pretty weird, probably due to the character’s ages.

I was given a copy of this book via NetGalley in exchange for an honest review.