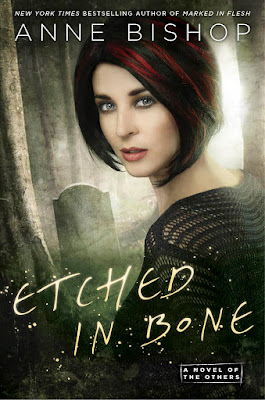 For those unfamiliar with the series:
I listened to the audiobook for Written in Red, the first book in this series, a year ago last month. I had purchased a second hand copy of of the actual book months prior but after it being recommended to me so many times I decided to get the audiobook so I could get to it sooner. I instantly fell in love with it and the unique world Anne Bishop has created for us.

The Others books follow Meg Corbyn, a cassandra sangue (AKA blood prophet) who sees the future when her skin is cut, escapes the horror that most of her kind live in. They are basically used a prostitutes – nasty people pay for their future to be told to them and sex if they are willing to pay enough. The girls are kept very sheltered because exposure to too many things will overload them, so they are taught things a little at a time and only what they may need to know to give a prophecy. If they speak the prophecy they forget it immediately and experience a euphoria. If they do not speak it they remember it but experience an awful pain in place of the euphoria.

Meg finds sanctuary in the Lakeside Courtyard, a special community run by the terra indigene (they are the “Others:” werewolves, vampires, werecrows, elementals, and so much more). History has shown that humans and the terra indigene do not get along but Meg finds a place in the Courtyard and a special place in everyone’s lives. For the first time in their history, she brings terra indigene and humans together to genuinely care for each other.

I think what I like most about this series is that it explores relationships in the most unlikely ways. It is similar to a squirrel and a goose falling in love with each other, but neither one knows anything about the customs of relationships so they’re creating a new path for themselves. I don’t want to give too much away, but read the books! They’re great!

My review:
Etched in Bone was so exciting to read that half of the time I couldn’t read fast enough and the other half I wanted to read so slowly that the book would never end. I feel like this is the first book in this series where we see how the relationship between the humans and terra indigene may pan out, and also a real glimpse at what everyday life in the Courtyard is like. The big upset comes from Monty’s brother, Jimmy, rather than from within the courtyard or an organization against the Others.

One of the most interesting parts to me is Meg learning more about using the tarot cards to give prophecy rather than by cutting. She has inspired other cassandra sangue that she’s in contact with to try to express them in other ways, such as by drawing.

There are several really funny parts that made me laugh out loud (cukkies, anyone?). So many of the characters are dear to me. I love the crows that are obsessed with shiny things, the pony elementals that are SO dangerous and powerful but love Meg because she gives them treats every afternoon, and Skippy, the little wolf who mentally “skips” and can’t turn into his human form. And the fact that the wolves really love dog treats but everyone has to call them wolf cookies because they can’t have anything to do with dogs. I really enjoy this unique world and seeing all of these interesting relationships play out. I believe that this is the last book with this story line, but there should be more in the same world just in a different part of the country.

Etched in Bone comes out on March 7, 2017. I was given a copy via NetGalley in exchange for an honest review.