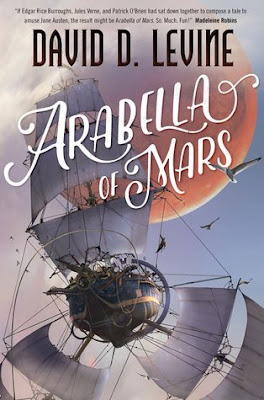 Arabella of Mars takes place on a colonized Mars in the 1800s and in London, England, on Earth. After her mother forces her to leave her father and brother on Mars and move back to London, Arabella finds herself on an urgent journey back to Mars to save her brother. Since she must get there as soon as possible, she finds herself disguised as a boy and brought aboard a ship as the Captain’s boy to help him with the navigation automation and do lowly ship duties.

I found the beginning and middle of the book quite difficult to get immersed in. I felt like the story was being forced along rather than willingly being told. Once the ship makes it back to Mars it is a wonderful story, but unfortunately that is only less than the final 20% of the book. In the middle part where they are on the ship traveling to Mars many things were not clear to me, such as how did they breathe in space on an open ship? Helpful questions in the world were not answered or even acknowledged.

Despite this, the world building is really fun. I love the idea of colonized Mars with Martians that resemble crabs or lobsters and we get to see a bit of their customs. Khema, who was Arabella’s nanny and tutor growing up, is an interesting character and I would have liked to see more of her.

This book honestly felt more like a draft than a finished book. It didn’t flow, the dialogue could be stronger, and Arabella’s characteristics were not consistent. On one hand she had absolutely no problem assuming the identity of a lower-class boy, and on the other she absolutely could not deviate from proper customs when acting or replying in a crisis once back as a female. I also would have also liked to see a bit of humor in the book; I think that could have taken it a lot farther than what it is right now. The ending felt rushed and cut off. A bit more of a resolution would have made it more complete, even if it was just a quick summary or epilogue.

Arabella of Mars will be available this Tuesday, July 12th.

I was given a free copy of this book from Tor in exchange for an honest review.