On February 9th, 2016, the final book in the Red Rising Trilogy was released.

This was a big deal.

I read Red Rising last fall and really liked it. Then I read Golden Son and that book shifted something inside of me; it is a book that really means something important. So as you can guess, I had high hopes for Morning Star.

It’s not at all like it was a bad book. It just didn’t get exponentially better in the way that Golden Son did following Red Rising.

Unfortunately I can’t mention any specifics without spoilering the heck out of everything, so I’ll be vague.

Basically, there were a bunch of badass characters throughout two and a half books who did what they needed to do and kill who they needed to kill and then they all went…soft. It really felt like an easy ending rather than an awesome one. I really miss the old characters and the ending was pretty corny.

The signing was pretty awesome though… 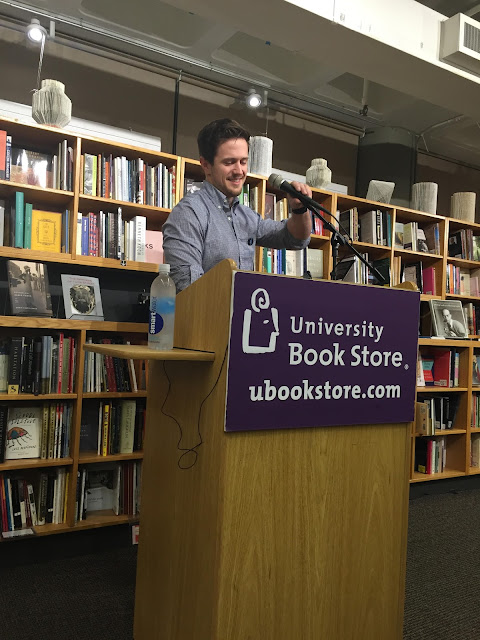 NOW FOR THE SIGNING!! Pierce did a signing in Seattle two days after the book released. I went right after work so I wouldn’t have to worry about parking or being there in time for a seat and I got there two and a half hours early. I talked a little with the other girl who was there super early but mostly read since I was barely halfway through. Pierce read the prologue then answered questions and joked around for about 30 minutes. A lot of the questions asked I recognized from the AMA he recently did so I didn’t take any notes. It was also recorded by the bookstore.

Since I was there so early I had my choice of seats. Front row it was! Which also means I was *second* in line for the signing so I wasn’t there for hours and hours and got to go home at a reasonable hour. He was so nice when I went up to get my books signed and patiently listened to me stumble over the two things I wanted to tell him. Despite not liking the ending, I still think it’s a great trilogy with really awesome writing and characters and do recommend reading it.