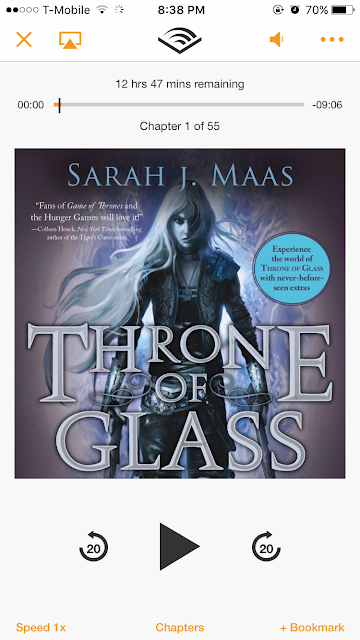 Throne of Glass was a very up-and-down read for me. The beginning and end were pretty weak for me but the middle was very interesting and exciting. This story follows Celaena, a notorious assassin who was caught and sent to a prison camp with horrific working conditions; most prisoners don’t last three months but Celaena has lasted one year. One day, the crown prince comes to ask her if she will agree to compete as his champion in a search for a private champion/assassin for the King. If she agrees, wins, and serves four years, she will have her freedom. She agrees and is taken back to the castle.

In the interesting bit in the middle, Celaena befriends a princess, a prince, and the head of the royal guard. These relationships are interesting, complex, and evolve with each page. During the contest, a supernatural element is introduced; it is very mysterious and intriguing. Up until the ending I was on board, but when Celaena made a decision regarding a love interest, I don’t feel that there were enough reasons to support the decision she made. It wasn’t the decision itself I wasn’t happy with (because anything can be argued in literature), but I feel that with the lack of support for the decision it was a weak one. With this ending, I have no interest in reading more in this series. I didn’t care for the audio book narrator either.