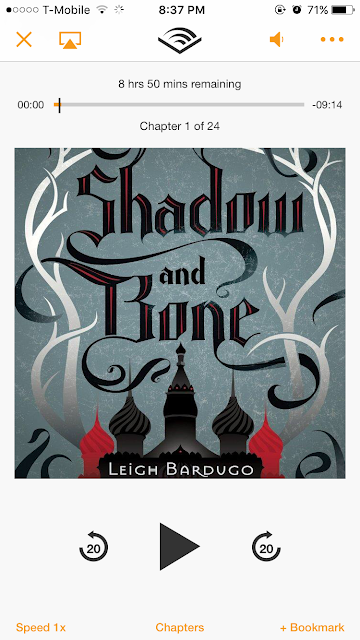 I was very surprised at how much I liked Shadow and Bone. I downloaded the audio book when audible had a really good sale going on and started it soon after. I had just finished Beauty by Robin McKinley and I was being stubborn about starting a new book, as one is after finishing a really good one. So I started listening, digging my heels in at the beginning. Before I knew it, I was so into the story.

Alina grew up an orphan and was serving in the King’s army as a map-maker when her powers awoke, instantly rocketing her from lowly soldier to a revered Grisha. The only additional thing I’ll say is it involves two men and all the right decisions. Seriously, with Alina I didn’t have any, “Noo! Don’t do that you stupid wanna-be heroine!!!” moments. She is brave and strong and will do so much to survive.

As much as I loved this book, I don’t plan on reading the other two books in the trilogy. I really like where this book ended and I think stand-alone books are seriously underrated. If you do end up listening to the audio book, keep an ear out for the narrator to say “prown crince” instead of “crown prince!”