January always feels so… new. I also have my birthday at the end of the month so it is one big time for new beginnings for me. Instead of resolutions, I like to choose new directions I would like my life to go in. Sometimes they’re big, sometimes they’re small, and sometimes small decisions lead to big life changes.

My main goal this time last year was to get a new job, and I finally found one in July. The second smaller goal was to do things that I always wanted to do “one day.” I think I did a pretty amazing job of it if I do say so myself.

I dyed my hair a fun color. In February I had my hair dyed teal, inspired by Keiko Lynn’s dye job. In the process of getting my hair did, I made a new friend. 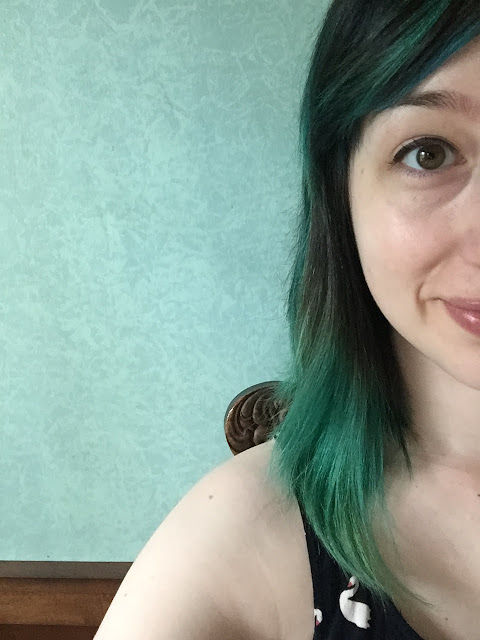 I got a tattoo. Much to my mother’s dismay, I finally took the plunge and got what I wanted for more than twelve or so years: a tattoo! So what does one get as their first tattoo? Something you will not regret, so I choose to get my little furry BFF. Yes, it hurts, but the memory of the pain seems to fade over time and I already want another.

I got a new job. Already mentioned this, but it really made such a difference on my quality of life. I no longer dread waking up every day. I made more hourly, work fewer hours, and have less stress. Score.
I went to ECCC for three days. Yup, I went to Emerald City Comicon for three beautiful days. In 2014 I went for only 1 day, actually part of one day. I was super overwhelmed and didn’t know what I was doing but knew I wanted more. I had no idea it would happen, but going basically changed my life. Prior to going, I had read Saga Vol 1, Rat Queens, the Autumnlands, and Shutter, and I didn’t really know what I was doing other than the fact that I really enjoyed them. At ECCC, I met so many awesome people (Kurtis Wiebe recognized me from twitter and KNEW MY NAME; and I met Benjamin Dewey, who is so impossibly nice and gave me a free sample of his book after I told him I was new to comics) and found so many awesome comics that I just couldn’t stand it.

I couldn’t seem to get any of the friends I already had into reading comics to talk about them with me, so I decided to start a ladies comic book club to find other girls to talk about them with. The first meeting had 5 attendees (and we still do stuff together, the 5 of us) and now, less than a year later, have 30 people RSVP’d to come to the next meeting. We have comic creators talk to us at our meetings and I have submitted an application to have our own panel at ECCC this year.
Basically, I created this thing that has brought people together and other members have thanked me for doing and it feels really good. I now have something to talk with people about besides, “blah, I hate my job, I hate my life, cats.”
I started taking private French lessons. I have always, always been a Francophile and eventually wanted to be fluent in French. I’m far from fluent but I’m having so much fun and look forward to homework for the first time in my life.
So those are the big things that I already knew ahead of time that I wanted to do and did, but some unexpected exciting things were done that I hadn’t planned on.
I started a book-review blog. In 2015, I received my first book for free. Well, by that I mean a company sent me a book for free. And I learned about NetGalley and Blogging for Books and eventually I found the call from Ace Roc books for people to join their new book-review street team. I applied, was accepted, and now they send me advanced books for free to review. How cool is that!?
I went to New Orleans. Technically, the trip had been planned since the end of 2014, but by going with two girl friends of mine and having an awesome time, we ended up making it a yearly tradition to take a trip together. This year we’re going to Savannah and I cannot wait for some Southern food and sunshine. And to see the Atlantic again. And my parents! They’re 2 1/2 hours away in Florida and are coming up for lunch while I’m there.
I became an aunt. Again, something I found out about right at the end of 2014, but something that has turned out to be a big deal and totally awesome. I had no idea but when you become an aunt it’s almost like a rite of passage, like getting engaged or going to Europe. Suddenly your range of topics opens up and you can talk with other aunts about how awesome your nieces and nephews are. This is the first baby I have ever liked so that’s a big deal too.
TL;DR: Do what makes you happy or work in the direction of things that make you happy and your life will be/get awesome. If you’re like me and had so many things on your “I wanna do” list you didn’t know where to start, just pick something. You have to start somewhere.