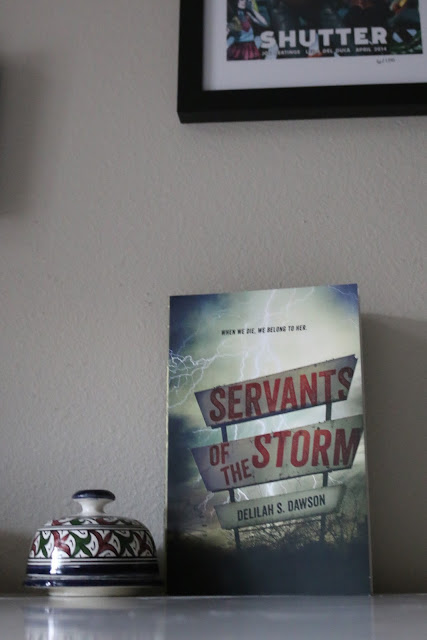 This is the fifth book and second world I have read of Dawson’s and I absolutely love her authorly abilities. She has a magical way of creating worlds or versions of our world without having to explain too much, but you totally know what’s going on. She seamlessly gives details throughout the story so it doesn’t seem like you’re reading paragraph after paragraph of descriptions and rules, because you aren’t. Servants of the Storm is set in Savannah, GA (visiting in February, yay!) and the book starts just as the fictional hurricane Josephine hits. Our main character, Dovey, loses her best friend, Carly, in the storm, and Savannah herself loses and untold amount of people, animals, and buildings. About a year after the storm, Dovey stops taking the anti-psychotics she was prescribed after Carly died and realizes that these aren’t normal pills- they make you passive, compliant, and zombie-like.

If you’re a stickler for spoilers, stop reading now. I feel that mentioning a few of the heavily hinted-at details may convince one to read this book if you are not yet convinced.

Hurricane Josephine wasn’t just an act of nature- it was brought about by demons, as most natural disasters are. Demons wanted a stronger hold of Savannah and they needed a way to get more servants, and fast.

Of course, I won’t give away all of the good surprises of this book. Several reviews I read online said they liked the book in the beginning only, and I think with just a little more information in the description more people would know what to expect and if this is the type of book for them.There’s also sisterhood, lust, love, ghosts, and lots of fun, creepy stuff. And chocolate cake!

I haven’t been able to find out if this is a stand-alone novel or a series, but since it isn’t mentioned it seems to be the former. There’s definitely enough material to make it into a series, but I also think it stops at a really interesting place as a stand alone.
5/5