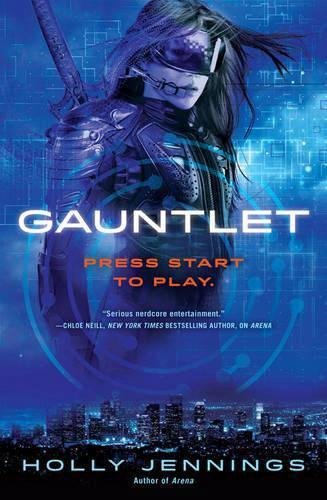 Oh, ouch. Gauntlet. What a disappointment, especially after how much I LOVED Arena.

In the future, 2050-something, the most popular sport in the world is being a professional virtual reality video game player. The players are celebrities and are only as strong in-game as they are in real life. In Gauntlet, Kali Ling has purchased her team, Defiance, to become owner to make life better for her team mates. The first 60% of this book (and I know that because I read it on my kindle) is nothing but her whining and complaining about how hard it is to make decisions and be a team owner. I almost stopped reading so many times. Eventually she gets her shit straightened out, and team Defiance realizes that the VGL (company who runs the games) is out to get them. Meanwhile, a really rich guy invents new pods that they play in to make the game more safe for the players mentally. A new worldwide tournament starts with the winning team taking home 100 billion dollars.

There are so many things wrong with this book aside from the first 60% of it: Team Defiance realistically would not have a serious running in this tournament as they are too inexperienced; I don’t feel that the hate that the VGL has for Kali is believable; and there is no way they’d be able to get as far as they did in the championships. TLDR, I guess this book is just not believable in this fantasy world.

My favorite thing about this book is being inside the games as they happen. The author creates a really awesome virtual world and I really enjoyed the game play, I just wish there would have been a different story outline for the book.

I received a copy of this book via NetGalley in exchange for an honest review.