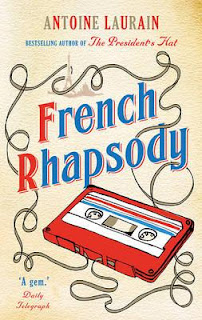 After reading The Red Notebook and The President’s Hat I was so, so excited to find out that Antoine Laurain had another book coming out. French Rhapsody is about a letter inviting a band to come in for a meeting with a record later… arriving 30 years after it was sent. We are given insight to the lives of the members of the band, along with some of their spouses or significant others. I think the bones of the story are good – it still has that magical outline (in a non-supernatural way) that I’ve come to expect from Laurain’s books, but I was lost several times while reading some of the meat of the book. There are some political undertones that seem to nod to the current situation going on with the upcoming election in the U.S. (I don’t know if this is intentional or coincidence) and the characters go on these rants that just made my eyes glaze over. I would wake up a page or two from where I last remembered reading and when I went back to reread what I had missed, and I had in fact missed nothing.

I can’t say I would recommend reading this book, and I won’t be adding a physical copy to my bookshelf. I do still adamantly recommend his other two books, don’t let this one deter you from them!

This book will be release on October 11th, 2016.
I was given a copy of this book via NetGalley in exchange for an honest review.