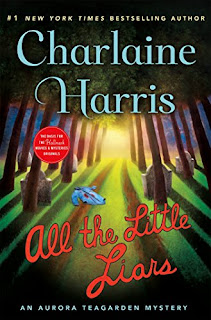 All the Little Liars is the latest book to come out in Harris’s Aurora Teagarden Mystery series. It is book 9 and coming out after a twelve-year hiatus. I was so excited to get an advanced copy of this!! Overall, the story wasn’t bad, but I do have a few issues with the book. Firstly, even though book 8 came out in 2004 and it is now 2016, book 9 picks up right after the last one with hardly any time passing. I feel that this is just too much of a gap (in real life) to make the next book feel like it really comes right after the last book.

This book also felt like it should have been a novella to ease back into writing/reading Roe’s world, or had something else going on with the story besides just Philip (Roe’s younger half brother) missing. I feel like the other books had a bit more going on and that this one felt like things were dragging.

Lastly,  the writing just didn’t live up to what I have come to expect from Charlaine. She kept doing this thing where she would have Roe explain this big long theory to the reader then say that she explained what she just said to Robin, the police, etc. It made reading awkward and it just didn’t flow like her books usually do. The dialogue was also very stilted, like the writer was nervous to be writing it and used textbook grammar and replies. It needed more contractions throughout and more natural replies (especially from Roe’s mother). One of the teenage characters actually said, “As if!” which would have been fine 20 years ago but not now.

It was very disappointing and not at all what I expect from Harris, especially after an amazing ending to the Midnight, Texas trilogy that wrapped up just a few months ago. Despite this, I deeply love this series and recommend it to anyone interested either in mysteries/cozies or Harris’s other work.

This book will be released on October 4th, 2016.
I was given a copy of this book via NetGalley in exchange for an honest review.