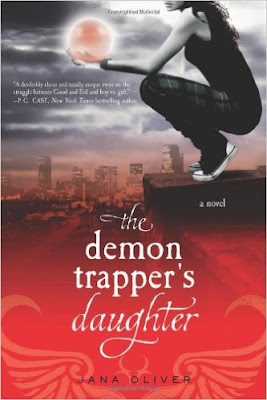 The Demon Trapper’s Daughter was a souvenir from the gift shop/visitors center at Oakland Cemetery in Atlanta, GA. I was excited not only that they had a gift shop, but that I was able to get a book there that partially takes place in the same cemetery.
This book is extremely YA, and in a bad way. It could have easily been written in a way that would have included a wider age range, but either the author wanted to appeal to an early-teen audience or she suffers from the old-lady syndrome of trying to talk about “really cool” things that really just show her age. Noting that the MC has a “denim messenger bag,” using “ohmigod,” and spelling “eww” as “euuu,” using way too many italics, and calling someone a “creeper” when she means weird and not actually creepy are examples of these. These issues are littered throughout the book and it’s too bad because aside from them, this book is actually really good.
Once you get past the cringe-worthy moments, it is written quite well. Riley’s dad is all she has left in the world, so when he dies she is left to fend for herself. She tries to follow in his footsteps by becoming a demon trapper, but some of the other trappers are going out of their way to see her fail.
I thought the world-building was pretty cool. I really liked the uniqueness of the different types of demons and all the characters were nicely developed. I am interested to see where the story goes and may read more at a later time.